The Women’s Faculty and Staff Club and the Men’s Faculty Club decided in March of 2009 to merge into one group. The newly merged consituent club decided to name its self the Luncheon Club. They presented a new set of by-laws at the Anuual Meeting.

The merged group will work with the University Women’s Club to collaborate on the Luncheon/Speaker series and plan other actvities that they think will be appealing to club members, the campus community and beyond. 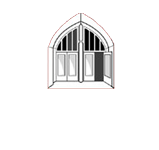 These doors have been welcoming members and guests since 1912!

Rich in tradition, the historic University Club of Indiana University boasts two elegant and affordable banquet rooms and has been the premiere Club in Bloomington, Indiana, for over 100 years! Located on two floors of the Indiana Memorial Union building on the IU Campus, the Club is at the heart of this Big Ten University Campus. Our well-appointed banquet and meeting rooms are suitable for weddings, trade shows, conventions, award ceremonies, reunions, memorials, retirement parties, lectures, and conferences. Both rooms feature grand pianos, fireplaces, kitchens, fine works of art, and hold up to 100 guests for your private parties and business needs. Members of the University Club enjoy an array of programs, special events, and Speaker Series Luncheons. Membership in the club remains a remarkable value with numerous benefits including free "members-only" rooms; the Billiard Room, Reading Room, and Library, access to 14 different and stimulating Interest Groups that range from antiques to yoga, reciprocal rights at 93 other clubs through the Association of College and University Clubs, and deep discounts on banquet room rentals. For business and private events that are as smart and stylish as you – call the University Club.